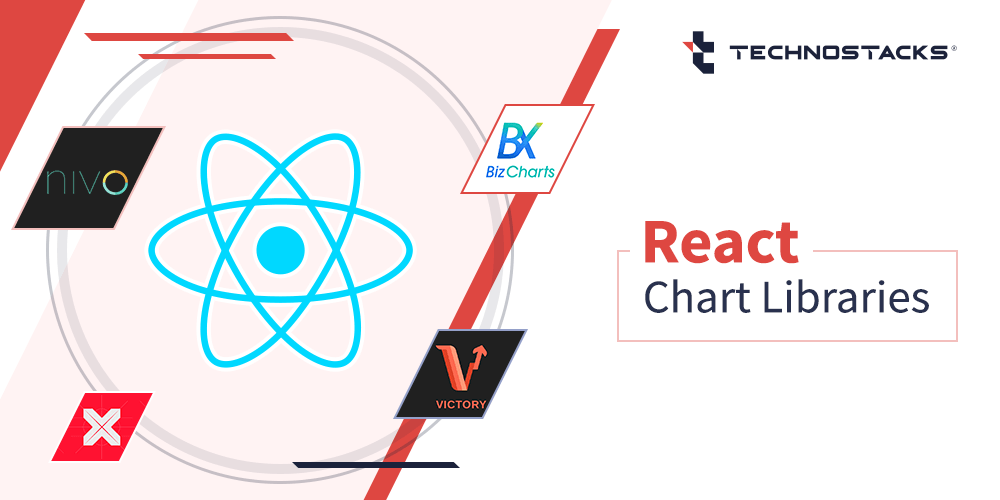 Many of us have faced a rational and most often irrational phobia of maths and numbers as a child. But, if we think about quantifying mathematical data in systematically organized charts and graphs, the picture doesn’t look scary.

React chart and data visualization libraries do something similar. In the preceding article, we will look at what are open-source React charting libraries in 2022 and some of the most reliable chart libraries available for React.

Most web developers have a deep relationship with charts and graphs. When working on a project, they retrieve data from the database and present it meaningfully.

It can be challenging to create user-friendly charts. It is not a good idea to spend too much time creating visualizations.

By Using the right React chart library, you can quickly create stunning data visualizations. Your users will also be able to find more valuable insights faster.

Have an App Idea?

Talk with our experienced app consultants and we will help you to create customized mobile apps as per your requirements.

What is a React Chart Library?

React Chart Libraries, also commonly known as React apps, work on visualizing the data, managing the libraries, allowing users to write and design the components, and assisting them in maintaining the data. These versatile and scalable apps use frameworks that are highly functional and sustainable in the long run.

React Chart Libraries prove to be a beneficial tool for web developers who wish to integrate meaningful data in their web projects. These apps basically help web developers display how a particular application or feature is working or expected to work in the near future. They can also be considered a boon to web developers since it has made them shift their focus to produce actual data without having to worry about its design and presentation.

The chart is a common component for mobile and web apps. Different types of charts provide different information. Digital charts are popular because they allow us to understand and gather crucial data in specific formats that suit our needs. Charts for React are also easier to work with and mainly include line charts, bar charts, pie charts, Gantt, and bubble charts.

React chart libraries are also known as React apps. These apps are flexible and scalable and use frameworks that can be used over time. Chart libraries for React are a helpful tool for web developers looking to incorporate meaningful data into their web projects.

Most popular React Chart Libraries for Your Web Projects

Many professionals are now switching their ways to use lightweight React chart libraries that are equipped with modular charting components for React to ease their work. Amidst this conventional change, we have brought a list of the best and most popular React chart component libraries to your screens. Without further ado, let us begin:

The components used by recharts are completely presentational, partly because of their declarative nature.

It is widely known that most professionals recommend recharts as their first choice to those who are looking for an easy and simpler approach to get them through with the data visualization projects.

The platform has record-setting weekly npm downloads at 544,578. The app is popular among the developer community and facilitates the data visualization process of professionals with maximum convenience.

For the unversed, chartjs is a beginner-friendly react chart library that uses the elements of HTML5 Canvas to build chart components that are unique in their types and kinds.

To use React-chartjs-2, one should be familiar with the documentation of Chartjs. Being an easy-to-understand framework, one should not face many difficulties in doing the same. With 338,760 weekly downloads, this react chart library is worth giving a chance to.

Additionally, it also allows for convenient and straightforward integration of charts including line, pie, bar, and candlestick to the web and React Native applications. Developed by Formidable, Victory has a weekly npm download rate of 126,898.

A piece of exciting news is that the developers of Visx do not claim it to be a react chart library as such. Instead, they view it as a collection of low-level visualization components that can be easily reused.

One can also have a look at the Bar Chart Example Code of this easy-to-use platform to gain a better and enhanced understanding of how it actually works.

Nivo dispenses SVG, HTML, and Canvas charts in a single charting library while also offering transitions (or motions). If you are looking for a precise and versatile solution to your data visualization needs, Nivo acts as a one-stop-shop for you.

It promises to give you an engaging user experience with gradients in charts.

Users appreciate the documentation for its ability to design and choose from a number of charts. This is evident from the 8k stars it has received on GitHub in a short span.

Want to build App for your business?

Talk with our experienced app consultants and we will provide you tailored made solutions as per your requirements.

The template library provided by them is impressive and highly versatile. BizCharts is also known to possess the most extensive collection of charts so far, making it a comprehensive base for designing and data visualization. Highly popular among the Asian population, BizCharts witnesses a total of 20,452 npm downloads in a week.

The platform embraces more than 60 technical indicators and has 3.3k stars on GitHub. However, many people fail to notice that this react chart library does not launch frequent updates or other maintenance services.

Based on the d3.js, the features are not maintained well and launch occasional updates throughout.

It describes itself as a React UI library and design system for enterprise-level users.

Ant Design is a fantastic React chart library. This is partly due to the great documentation, which includes many examples, guidelines, and variants. It’s also an excellent platform for customizing existing components and themes.

Creating on EChart’s key functionalities, ECharts 5 makes it even simpler for programmers to tell the story behind the data sets by some new functionalities and enhamcements in story-telling and data appearance, augmented visualization and responsive design, collaboration and performance enrichment, programmer experience, globalization and more.

Let's talk with our experienced app consultant and share your requirements with us and get custom quote as per your needs.

The chart libraries for react, Rumble-charts, is one of the anonymous charting libraries. It is a collection of components to create flexible, composable charts that allow you to visualize the data. It is a simple app with modern-day templates.

React time series charts are useful for visualizing network traffic and other time-series data in an organized manner. They update the platform with clear examples and detailed documentation, making it worth the low maintenance.

This library was specifically designed for React to visualize network traffic and timeseries data. React’s library is focused on time series data charts. They were built using d3 with React at a higher level of composability. Although the library isn’t actively maintained or updated, it can be used for extensive documentation and examples.

There are innumerable benefits of using chart libraries for React, ranging from easy integration to convenient comparison, and of course, chart and graph designing.

A data visualization library presented in React apps makes the work easier for you. Now that you know all the available top react chart libraries, use them to ease your work burden.

These open-source libraries have been well-maintained and are highly recommended by React communities. The top react charts libraries are designed to help you represent data in the best possible form. It is also useful in the development of applications. Therefore, choose a library that meets all of your needs.

Remember that all diagram libraries and charts are designed to assist developers in achieving a specific outcome when choosing the right ones to use in your React project.

Check out what each one offers before deciding which one you should use. The type of features you are looking for and the requirements of your project will determine which React library is best to display your charts.

We at Technostacks have an expert team of ReactJS developers and if you want to add charts in your web project then you can contact us. Our experienced team of developers will give you the best assistance as per your needs.

Want to build your Customised App?

Want to validate your application ideas? Want to get free quote for your customised Application? Connect now!.

Q1. Which React charting library should you choose?
Answer: There is no single answer or a simple solution to this particular question. The React chart library that one opts for depends on individual factors that are unique to everybody’s needs. One should go through varied factors like your ability to perform code, your willingness to design charts, getting access to pre-existing libraries, and much more.

It is recommended that one goes through different factors and draws a comparison between other React apps to make the most appropriate selection.

Q2. What is the best React charting library?
Answer: Some of the finest and most popular react charting libraries for executing data visualization projects are recharts, react-chartjs-2, Victory, visx, nivo, react-vis, BizCharts, Rumble Charts, ant design charts, react-gauge chart, and echart for react, to name a few. Each of these libraries has their own properties and slightly differ in the services they offer.

Q5. Which is an easy to use react chart library?
Answer: Recharts is one of the best react chart libraries available for web developers today. But, the good news is it is also the easiest to use and understand by newbies who might feel that the process is too overwhelming. Starting with Recharts can help you better understand the dynamic of data visualization since it is presented in an organized manner.

Q6. What is a chart in React?
Answer: Charts are a component of React apps that helps in rendering standard data visualizations based on an array of series and/or datums. A chart in react chart libraries can be available in the form of a line chart, bar chart, or area chart. Other components that function similarly to charts are heat maps, scatterplots, contour plots, hexagon heatmaps, pie and donut charts, sunbursts, radar charts, parallel coordinates, and treemaps.

Q7. How do you implement a chart in React?
Answer: To use chart in React apps, follow the instructions:
Install node, VSCode, React, Chart, and Bootstrap on your PC. Next, develop the activity logging system by entering the activity and hours spent on that activity, submitting it, and adding subsequent actions with their duration. A chart will develop according to the input data.

Q10. Which chart library integrates well with React?
Answer: Recharts, one of the best chart library for react, is based on React’s component principle. This allows developers to create charts using reusable React components.

Q11. Does chart js work with React?
Answer: There are numerous npm packages that enable charts to be crafted in React; chart.js is one of the precise packages which makes the generation of diverse charts and graphs simple along with the React wrapper for a chart.

Q12. How do I use Google charts in React?
Answer: First, import react–google–charts to get the Chart property. Next, you have to create a variable that will hold the data for the pie chart. You can customize the pie chart by simply updating the data to the array.